Fish and fish products are beneficial to health 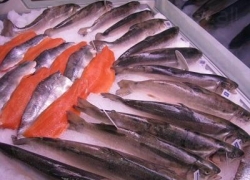 Why is fish so beneficial to our health?

The secret is in the omega-3 fatty acids in it.

There are many reasons why fish and fish products have an important part in our nutrition.  The omega-3 fatty acids are beneficial to various system of the human body. Here are some of them:

- They are beneficial to the function of the brain and improve our ability to  concentrate. It has been proved that eating fish at least twice a week strengthens the memory and reduces the risk of developing mental illnesses.

- Scientists have proved through a series of experiments that fish also reduces bad cholesterol, which affects the health of various age groups.This is a precondition to reducing the chances of heart diseases.

- They reduce the risk of atherosclerosis, ventricular arrhythmia and high blood sugar.

- Scientific research from 2010 proved that some foods can reduce the risk of Alzheimer's and fish was one of them.

- Another scientific finding is reduced risk of rectal cancer. It has been proved in an experiment with 1800 participant that the risk of developing this type of cancer is 40% lower in those who eat foods rich in omega-3 fatty acids (especially fish).

They have an anti-inflammatory effect that stops the hardening of arteries. They make it difficult for blood clots to form and contribute to the decrease of the level of triglycerides in the blood.
Fish is particularly beneficial during pregnancy. It helps the development of the baby's brain, contributes to the mental development and motor abilities of the child and prevents the post-natal depression of mothers as well. A pregnant woman can eat at least 340gm of fish and fish delicacies in a week.

It is recommended to eat fish once or twice a week. Your best choice is the fish that is richest in omega-3 fatty acids such as salmon, tuna, mackerel, lake trout, herring and sardines. Whichever fish you choose, it is best not to fry it.

It has been found that people who eat fish at least once a week have lower risk of having a heart attack, a stroke, cardiovascular insufficiency or a sudden cardiac arrest. Replacing merely 3% of the proteins we receive from meat with proteins from fish leads to 31% lower risk of death caused by cardiac problems or a stroke.